Who We Are
History Management Safety

Founding and the Early Years

In 1947 Bert Redgwick received his C-12 contractor's license, purchased a Caterpillar D4 loader and entered the excavating and grading business as H. A. Redgwick Excavating and Grading. Following two years of success, he formed Redgwick and Banke Inc. in 1949 in partnership with George Banke, who owned several war surplus dump trucks which he rented to Bert Redgwick. By 1953, Redgwick and Banke was incorporated and received an "A" license to go with its original C-12 license.

In the 1950's the company expanded further, adding more loaders, rollers, trucks, a bulldozer, two small Le TournaI Westinghouse scrapers, 12 trucks, a compactor and paving equipment. In addition, the company bought about 15 acres of land with an old house on it which served as an office, a yard to park equipment and a rock quarry containing a non-expansive gabbro rock. During the 1950's Redgwick and Banke, Inc. was one of the leading grading and paving companies in the Bay Area, working on a majority of the new schools, commercial projects and public works.

Growth and Change in the 1960s

In the 1960's the company began to diversify the work, working on larger jobs such as industrial and commercial projects, more public roads and buildings, malls including Fremont Hub, Newark Square and Southland Mall.

The Company was split in April of 1969 with the formation of G. P. Banke, Inc. The spinoff of G. P. Banke was done to allow George Banke to have control of his own company, and allow Bert to retire with Don Redgwick, Bert's son, in charge of Redgwick Construction.

Continued Success and a New Era

Between the 1970's to 2000 the company's focus remained much the same. RCC was involved on major infrastructure projects throughout northern California. In early 2001 Don Redgwick retired from full time employment to one day a week. Bob Rahebi was brought over from Granite Construction Company and was named General Manager and Executive Vice President. Bob managed and oversaw the entire day to day operations of the company. In December of 2005 Bob Rahebi purchased Redgwick Construction Company from the Redgwick family. 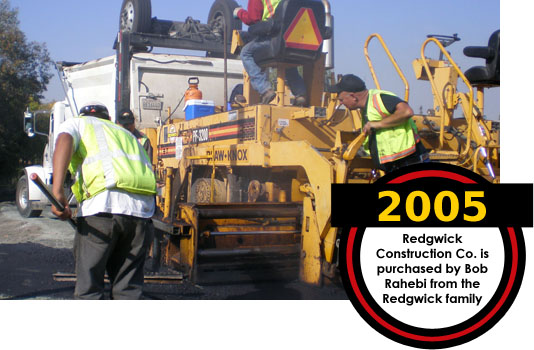